I’ve never owned an Xbox console before but over the years I’ve played a number of its exclusives that I greatly enjoyed. I’ve always kept my eye if I’ll ever get one for myself and the Xbox One X sold me to finally take the plunge. So I ended buying the Project Scorpio limited Editon Xbox One X as that it was its codename during its development which looks different to the standard model of the Xbox One X. Just the console’s design is very minimalistic which I love.

I’m not gonna spend too much time on the specs on this beast of a machine, just because it does everything better than the PS4 Pro with much better finesse on the hardware side it really shows the gap between the X and the Pro. Even the graphical fidelity on the Xbox One X I’ve noticed is much crisper and sharper than on the Pro. I played Rise of the Tomb Raider on both consoles and on the X you can clearly see the difference in performance and the graphical depth on Lara and the environments around her. One important factor to note that the Xbox One X has a 4K UHD Blu-Ray player while the Pro just has a standard Blu-Ray one.

My personal gaming experience with the Xbox One X has been nothing but mindblowing and not just from the gaming experience. It’s also from Xbox’s Live services that it offers the best online services of the three major consoles. It offers Xbox Live Gold which has become a standard practice ever since the original Xbox days. Microsoft last year released a new service next to Xbox Live which is called Game Pass, and what Game Pass lets you do is no different what Netflix does with its videos on-demand service but for video games.

The subscription is like $10 a month and basically, you can choose from current games or Xbox 360 and even Original Xbox games which you simply download and install and play away until finished and then pick another game in its growing library. And not only that you can play brand new games that are released going forward on day one and you don’t have to fork out $60-$100 for a brand new game as long as you have your subscription with Game Pass you are good as gold. Just recently Sea of Thieves was released and I didn’t buy the game I simply downloaded it on launch day and was playing with my mates instantly. This is a game changer for the industry going forward and I’m quite excited for it!

Games. I need lots of Games.

In no particular order, these are my top three games that are exclusive to Xbox that should be in your library. 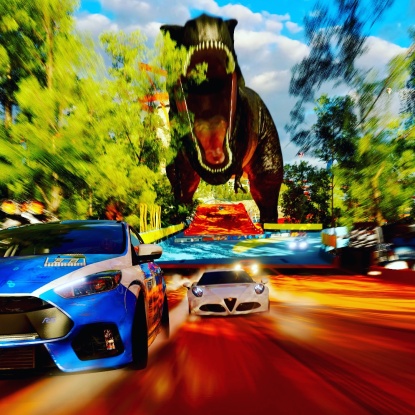 That’s a screenshot from one of my races on Hotwheels Island using the in-game photo-mode. Yes, Hotwheels Island. This game is like the racing kid’s dream. Forza Horizon series is a spinoff from the Forza Motorsport main-line series which this is more arcadey than it’s realistic simulator brother. Funny thing that there is another service I want to mention that Microsoft has with its games is Play Anywhere. I actually bought Forza Horizon 3 on PC way before I even owned an Xbox and when my friend mentioned to me that if I had an Xbox I could play the game on there without buying it again. Or I could play against my friends who have the game on PC while I’m using my Xbox or vice versa. This service only works with Microsoft Studios games only.

As for the game itself. There were two reasons why I bought this game and one of those reasons is this game was based in Australia in it’s setting. As an Aussie gamer, Australia doesn’t get represented that much in mainstream video games. So that alone I was excited to see how fully realised the world was. The other reason was how good this game looked. Yes, the PC version will always be the superior version but the Xbox One X version comes pretty damn close.

I highly recommend to get the Ultimate Edition version which I bought on sale which includes all the DLC’s and Expansions including Hot Wheels Island and using the actual Hot Wheel cars that as a kid I use to have and now you can drive them in a fully realised Hot wheels world, its bloody fun as hell!

Quantum Break is one of the most unique gaming experiences I’ve had ever, period. All I knew going into it was that it was a blend of live action show with the game and even by that brief summary I didn’t fully understand what that meant until I started playing it.

Quantum Break is a Sci-Fi action adventure game that deals with time travel and the main character Jack Joyce who is portrayed by Shawn Ashmore. The Time Manipulation abilities you gain through the game are the most thought-provoking ways of how you approach each area and the enemies you face off against. It’s fast and it totally feels like a slow-motion ballet of mayhem as you freeze time around a specific enemy while you pump him with bullets in slow-motion and then speed up time and see those bullets shred the enemy while you’ve moved onto the next group.

The story is centred on Jack Joyce, granted time manipulation powers after a failed time-machine experiment, as he comes into conflict with former friend Paul Serene over how to deal with an apocalyptic “End of Time”. And the experience that blurs the line between television and gaming. With Quantum Break, Remedy Games delivers an action-packed, fast-paced game in which you bend and shape time in order to survive. How you play the game shapes a personalized version of the television show. Watching the show gives you strategies and insights that will impact the way you play the game and helps you discover unique content within the game.

We are droppin’ into Hell, troopers! Time to grow a pair!

It’s pretty much self-explanatory. This a must-have in any Xbox Owner’s library. The collection consists of Halo: Combat Evolved Anniversary, Halo 2: Anniversary, Halo 3, and Halo 4, which were originally released on earlier Xbox platforms. Each game in the release received a graphical upgrade, with Halo 2 receiving a high-definition redesign of its audio and visuals that are exclusive to the collection. The game includes access to the live-action series Halo: Nightfall and they have also Halo 3: ODST.

I played the original’s when they were released at their respective times and playing these remastered versions of the game just brought all those memories back and playing Co-Op with your friends through the story and multiplayer is as still strong. And I never got to play the newer additions in the series, this was a good chance to play them on the Xbox One X.

There’s so much content in this collection and at a cheap price. I highly recommend it if you love FPS games and Sci-Fi combined.

This is the place where I will share my thoughts, opinions and commentary on everything that is gaming. Just kick back and relax in sharing my passions with you geeky folks as this will be the best game you'll ever play. View all posts by gypogamer